Here are two intersections of older Econolite and Eagle signals that are scheduled to be replaced soon.

First is an intersection with a couple of Econolite 3 way clusters with two single Eagles in between. These are located on Ryan road just north of 9 mile road in Warren. The first picture below is looking North on Ryan and the second is looking East on the side street. 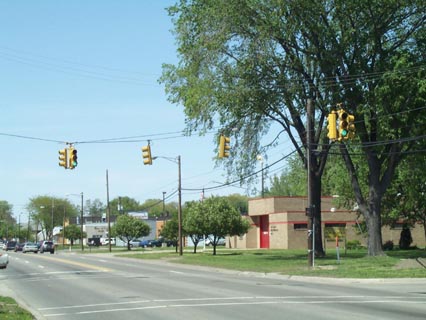 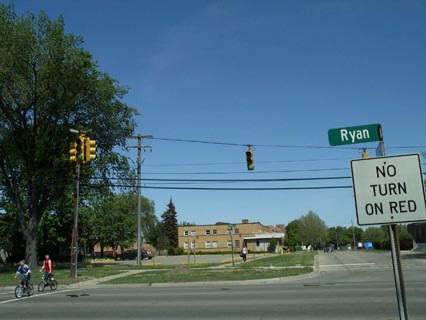 Here are a couple close ups of one of the clusters. 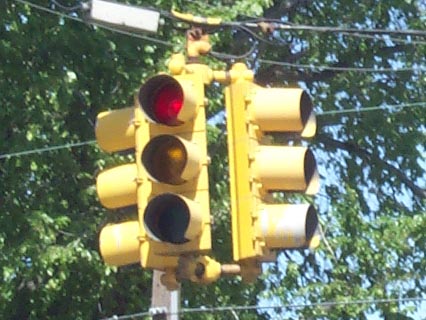 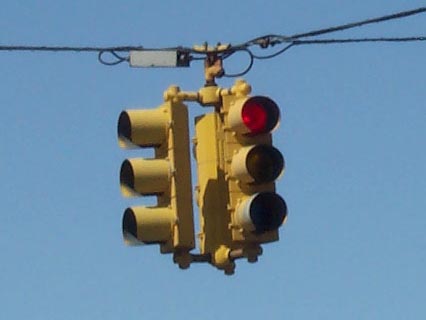 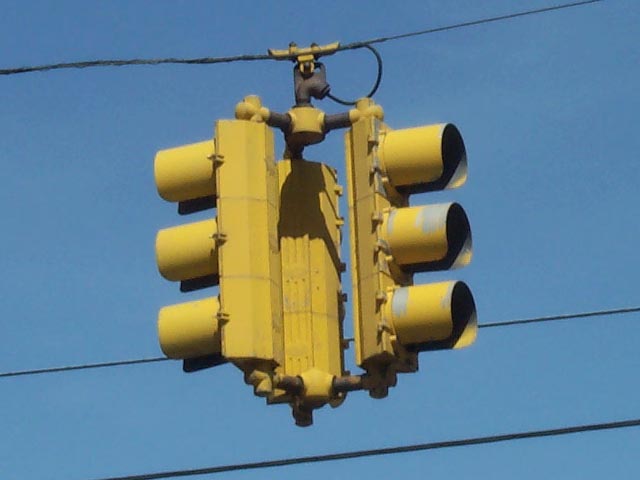 There are also two pedestrian signals at this intersection. One is a newer 9 inch durasig which is not pictured. The other is an older aluminum Eagle 9 inch pedestrian signal with the extra long visors that Eagle pedestrian signals are known for. These used to be very prevalent in the Detroit area, but their numbers are dwindling very quickly.

These signals were taken out of service on 02-06-2004. They were replaced with 12 inch LFE poly signals with red and green LED's and LED pedestrian signals. A modern electronic controller was also installed. 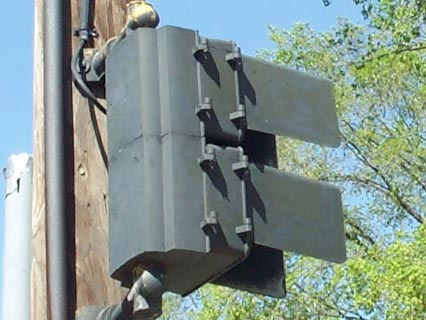 Here are close ups of both clusters

The 9 inch Eagle pedestrian signal has a push button on the pole. When the electro mechanical controller that controls these signals is in flash mode, pushing the button will bring the controller out of flash mode and the signals will cycle through both phases once so a pedestrian can cross the street and then the controller and signals go back into flash mode.

These signals were taken out of service on 10-02-2003. They were replaced with 12 inch LFE poly signals with red and green LED's and LED pedestrian signals. A modern electronic controller was also installed.

Here is a signal that is also a "rare bird" in the Detroit area. This is a 3M pedestrian signal with symbolic indications. This head has a twin across the street from it. Other than these two, I don't know of any other 3M pedestrian signals in my area. There are a few stray 3M vehicle signals, but even those are becoming scarce! 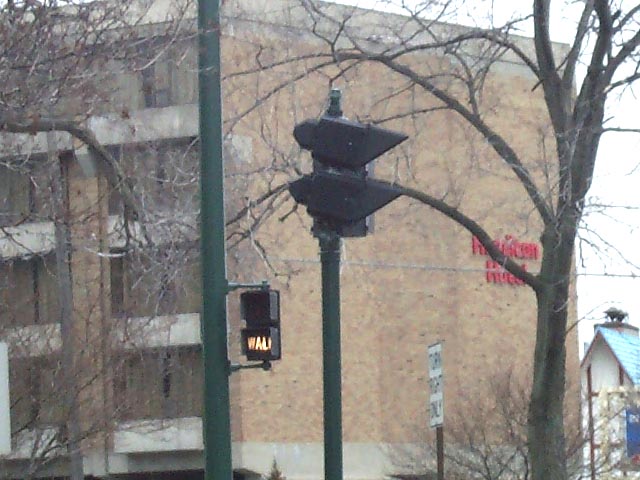 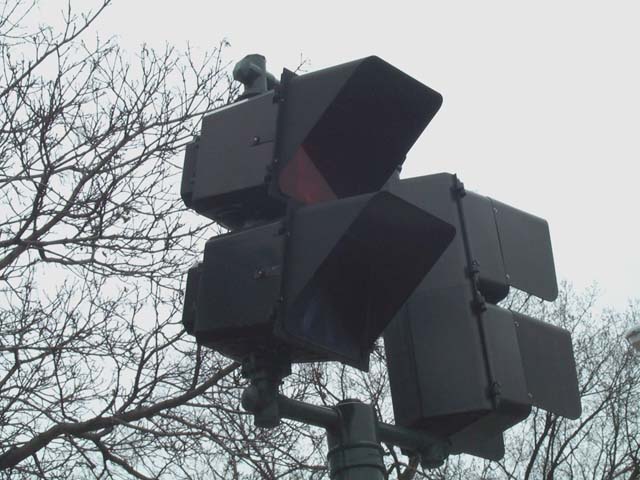 In April of 2007 I found this rare signal attachment. It is a Crouse Hinds 8" model R with an Eagle 12" enlarger unit attached. 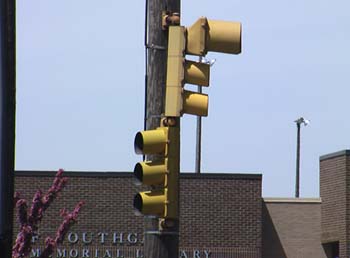 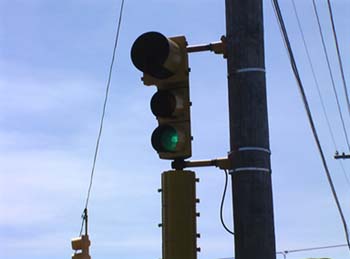 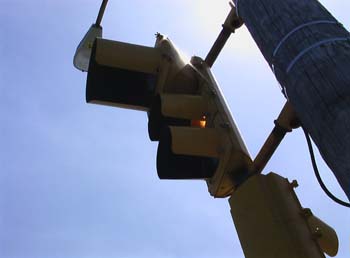 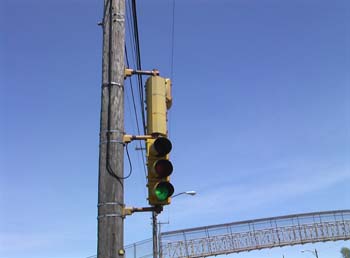 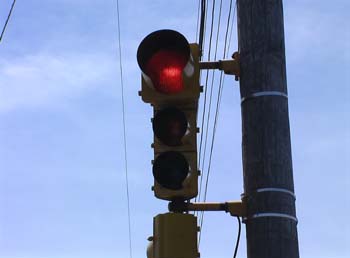 One bright and sunny, but cold day in February, 2009, another signalfan named Ryan was nice enough to take me and 2 other signalfans for a ride up to Pontiac, Michigan where we found these two 3 way clusters of Crouse Hinds art deco signals still in service! 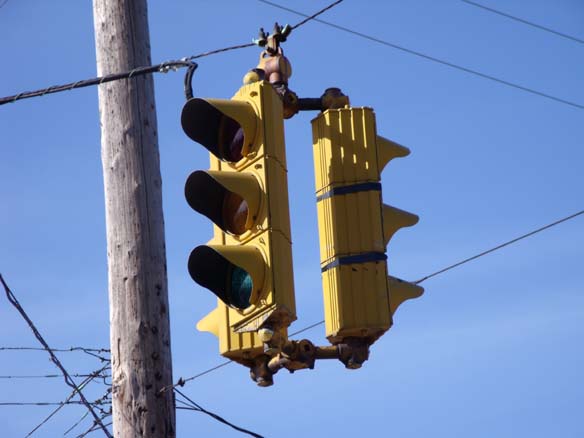 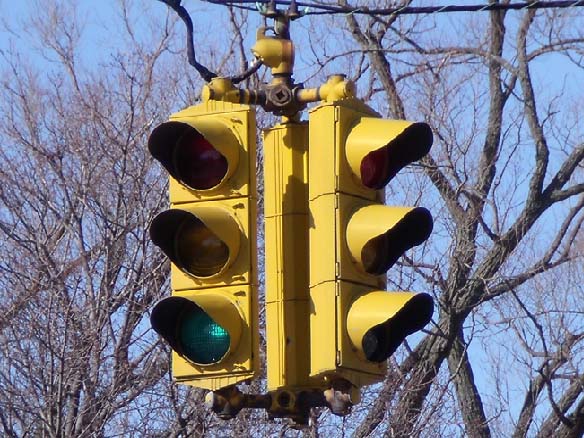